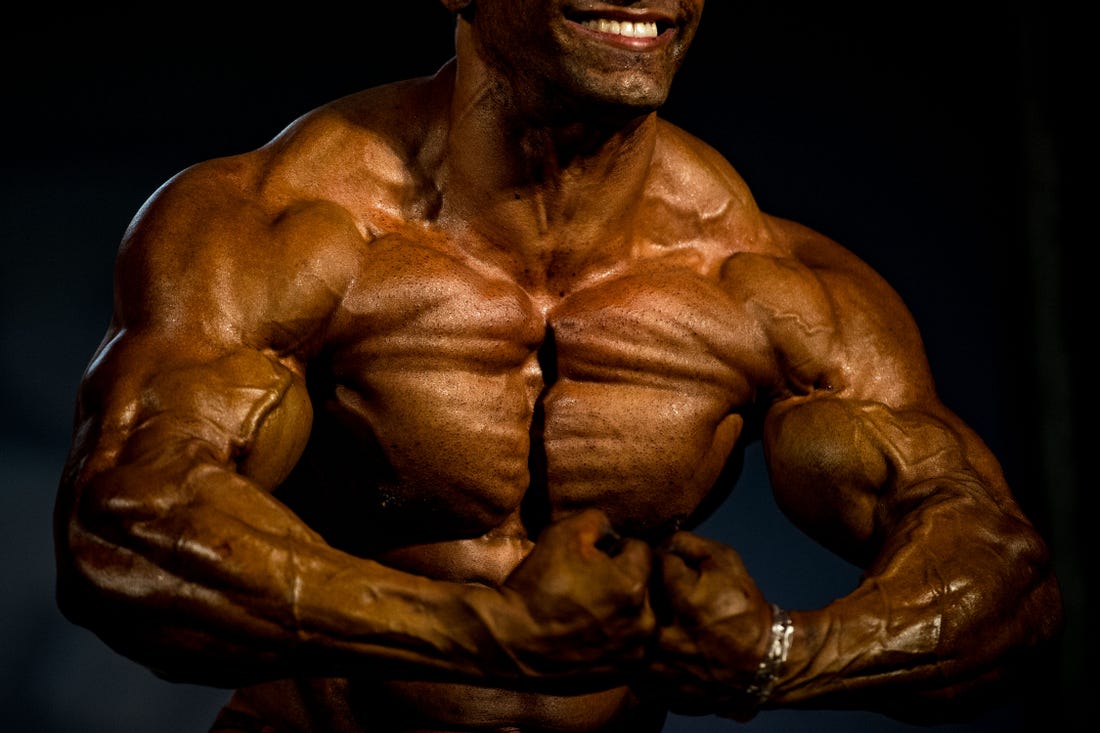 Myostatin protein binders…Glut-4 transport modifiers….4-AD-EC prohormones…Criminy! There is enough scientific terminology floating around bodybuilding circles these days to confound almost anyone. Sorting through it all is about as easy as whistling through a mouthful of saltines. After umpteen years of college, I even find myself playing catch-up at times.

So, in the interest of the “big picture” understanding, let’s take a deep breath, step back and review some of the major physiological “pathways” that can produce muscle growth. (Note: Some of these approaches overlap and they are not “biochemical pathways” in the sense that they aren’t a series of chemical reactions, per se. ‘Kay? Enough said.)

In order for the subsequent pathways to induce desirable muscle growth and performance enhancements, it first must be emphasized that proper training stimulus is critical. Although admittedly some of these pathways may actually induce some growth without appropriate training load (and intensity), those looking for physique enhancement and wellness need regular, intense resistance training.

Although not the end-all-be-all of muscle growth, energy balance is crucial to muscular gains. Far too many lifters carry on for years, obsessing over the latest dietary supplement without taking care of the fundamental underlying physics of tissue growth.

At about 3000 excess kcal (above daily needs) to build a single pound of muscle tissue, you can see why such lifters stay small. Remember, you can’t make something from nothing!

An extra 400-500 kcal per day above daily needs should supply the necessary energy for muscle growth. Along with surplus protein (up to a gram per pound), this should set the pace for a one-pound gain each week.

Clearly, random calories (junk foods like fries, chips, pastries, etc) are not the best way to put on weight, as fat gain is also a possibility. Keeping the training stimulus intensive and a good portion of the caloric intake post-workout helps partition the nutrients toward muscle gain.

After being dubbed “the body’s most anabolic hormone”, insulin is an obvious endocrine (hormonal) route by which we might gain muscle mass. In fact, it’s a necessity for proper usage of the kcal and protein mentioned above. As anyone who’s known an “out of control diabetic” can tell you, lack of insulin production can lead to serious muscle wasting.

Insulin has both anabolic and anti-catabolic (anti-wasting) functions by way of direct actions on (muscle) proteins and through indirect effects on carbohydrate (glycogen) storage and increased cell volume.

As with the energetic pathway, the obvious way to manipulate insulin action is to eat regularly ??” some suggest even doing so during the night. Preservation and anabolism of muscle mass can’t be done without substrates (protein, carbohydrates, fats) and energy. Hence, regularly flooding one’s body with these building blocks (which also supply the energy) gives insulin something with which to work.

A meal of perhaps 30 grams of protein and twice that many carbohydrates every few hours is a good start (depending upon body size, activity level,f and other factors). Fats are well known to augment the insulin response to a meal as well ??” but many individuals limit their consumption to carb-reduced meals to prevent over-stimulating the insulin “system”. Too much insulin for too long can lead to reduced “insulin sensitivity” as the body’s tissues start to (partially) ignore its presence.

The next obvious endocrine approach to muscle gain is the “king of all hormones”, testosterone. By way of interactions with our very genes, test’ causes a host of bodily changes, not the least of which is increased protein synthesis and decreased muscle protein degradation.

And since men vary widely in circulating testosterone concentrations, it seems logical for some individuals to bolster levels (within reason) to maximize muscle size.

This is where prohormones come in. By increasing blood concentrations of testosterone and various other steroidal molecules, muscle mass can presumably be gained over a few week’s time. I say “presumably” because the published scientific literature has yet to document this. Still, anecdotal reports and underlying physiology strongly support hypertrophic (muscle building) effects.

Our final hormonal pathway here is more controversial. Growth hormone levels clearly play biological roles in muscle building and in fat loss – but alone its effects appear limited. Along with testosterone and insulin, however, there appears to be true synergy.

Unfortunately (for physique appearance) its concentrations fall considerably by the time we enter our 30s.

Reducing rest periods in the gym to less than two minutes and limiting pre-workout meals may help augment GH secretion. (Some experts argue that pre-workout carbs have been over-demonized in this regard, however.)

Certain amino acids like arginine and herbs like mucuna pruriens also have stimulatory properties. Additionally, 90 minutes into sleep, a daily GH surge also occurs but its augmentation is debatable.

Maintaining cell volume has been shown to be anti-catabolic in its own right. That’s right. As one mechanism by which some hormones work, simple water content inside a cell is a legitimate controller of tissue mass, itself.

Although much of the research behind this theory has been done in liver cells, there is compelling evidence that cell volume changes underlie many muscle wasting disorders.

Drinking fluids frequently both in- and outside the gym is a good start. So is maximizing muscle glycogen storage, especially via post-workout carb drinks. It’s no wonder that low-carb diets have been shown to increase nitrogen (read as “protein”) losses.

Creatine and glutamine supplementation is also related, as creatine monohydrate can elevate intramuscular phosphocreatine (and free creatine) stores significantly while L-glutamine is a major intracellular amino acid that falls with trauma and over-training. Getting these substances into a muscle cell brings about “good” water accumulation as well.

Another controversial pathway to muscle growth, the myostatin “system”, being the gene and its muscle-limiting protein, has only recently been described. Animals with this gene “knocked out” exhibit truly freakish musculature. Myostatin itself is one mechanism by which other muscle-regulating systems operate.

Aside from certain algae extracts that appear to bind with and neutralize the effects of the myostatin protein, there is little else we can attempt to manipulate directly. Many in the bodybuilding community are waiting with bated breath to see if ongoing research will ultimately support or refute “myostatin blocker” products.

Unbeknownst to many, our immune systems play a vital role in muscle recovery. Leukocytes (white blood cells like neutrophils and monocytes/macrophages) infiltrate and ultimately help repair sore muscles. In fact, much of the recovery phase after intense resistance exercise can be followed by watching various immune parameters.

Manipulating immune function can be done by preventing overtraining (e.g. by taking a week off for every 1-2 months spent in hard training), consuming carbohydrates during exercise (which prevents catabolic, inflammatory cytokine release), and consuming more omega-3 fats like salmon, flax and fish oil supplements if necessary.

Whew! Okay, so there you have it: a review of at least some of the pathways by which aspiring athletes can gain muscle. All are involved at any given time and it’s really up to the individual which pathway he or she will manipulate in pursuit of his / her goals. Hopefully, we’ve sorted through some of the confusing terminologies and pulled back to view the big picture. Good luck, whichever path you choose.