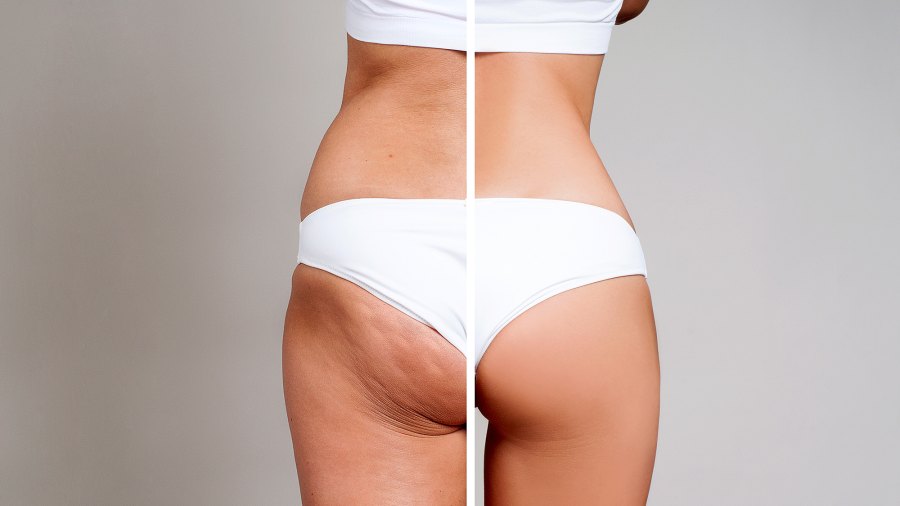 Cellulite, The word alone is enough to send chills down a girl’s spine. Up to 98% of all women are affected by it, yet it somehow remains socially unacceptable in most parts of the world.

No other condition that’s as pervasive and completely normal as cellulite causes as much embarrassment and aggravation to its “victims.” It is by no means a disease, yet there’s no doubt of its devastating impact on confidence levels and, subsequently, the quality of life of those affected by it.

Cellulite comes in varying degrees of severity. It’s been likened to everything from citrus peels in its milder stages to craters in the more advanced and, of course, the all too familiar “cottage cheese” in its secondary phases.

The lumpy appearance of the skin caused by it is enough to prevent millions upon millions of women from participating in seemingly simple, everyday activities, going to the beach? Not so fast — a swimsuit is involved, and that thought is enough to bring on a panic attack!

So what causes this gruesome condition? Amazingly enough, cellulite is yet to be fully understood. Scientists have just begun to figure out why fat protrudes into the skin’s outer layer, causing the dreaded dimpled look.

It’s currently understood that cellulite is simply lumps of fat that have escaped through weakened connective tissue separating it from the skin. Fat cells group together in an abnormal pattern, creating bigger bulges with a denser, harder feel.

There are other factors involved in contributing to the puckered appearance of the skin. For one, the connective tissue within the fat in the outermost layer of the skin begins to weaken, resulting in further dimpling of the area. Also, blood circulation in the affected area has been shown to slow down, allowing fluid to accumulate and the appearance of cellulite to become even more apparent.

The single most common misconception is the idea that cellulite is a result of obesity. This is a complete myth — the skin condition affects everyone from the top fashion models, to the average working-class female, to mothers, and even athletes.

It’s important to point out that body fat levels do have an impact on cellulite’s severity. Still, some women are extremely overweight yet have very little cellulite, while some of the thinnest women are embarrassed by the severe puckering of their skin.

When a woman is genetically predisposed to the condition, keeping body fat levels as low as possible will help alleviate the problem. After all, cellulite is made up of fat cells; less fat means a more even skin appearance.

Other factors that have proven to contribute to cellulite include stress, inflammation, and hormonal changes — especially an increase in estrogen levels, which is often experienced by women taking birth control pills. Both stress reduction and stable hormone levels will contribute to better health all-around, so taking charge of these issues would be a smart move for any woman.

While reducing stress may be easier said than done, certain steps can be taken by anyone to put this plan into action. Trying yoga or aromatherapy, or maybe finding a hobby that makes you happy, then participating in it for a few hours a week will do wonders to alleviate tension and improve your health.

Inflammation is continuously shown to be involved in the circulatory issues associated with increased cellulite manifestation and more serious health dilemmas such as arthritis, osteoporosis, heart and vascular diseases, stroke, Parkinson’s, and even cancer. Omega-3 fatty acids are the best possible way to prevent inflammation from occurring in the first place.

Elevated estrogen levels can be controlled in a few ways. The natural hormone produced by our body may actually be best controlled through diet and exercise!

The other part of the hormone equation lies in your contraceptives. Dependable birth control is now possible through the use of pills containing lower estrogen levels, and since excessively elevated estrogen has been shown to increase the risk of many diseases, it’s time to consider asking your doc for a new prescription!

There currently isn’t a ” cure ” for cellulite outside of a very strict exercise regime, a healthful diet, stress management, and stable, healthy hormone levels, and there currently isn’t a “cure” for cellulite. Over the past few years, numbers of treatments have emerged, and while they all claim to be the next greatest thing, it’s been nearly impossible to choose among all the hype associated with the products.

Most anti-cellulite creams available on the market (and there are hundreds to choose from) contain caffeine, aminophylline, and antioxidants, but these ingredients are in no way scientifically proven to reduce cellulite at all. Creams containing caffeine or aminophylline may temporarily firm the skin slightly by increasing blood flow to the area and helping to flush out excess water, acting as a diuretic.

The effect may last just a few hours, yet some are tempted to give this route a shot — if only to look decent in those shorts for a little while. None of the caffeine creams will ever work on the fat cells making up the cellulite itself, purely because they cannot reach the deeper tissues containing the fat.

There is a transdermal product that seems to offer some hope in smoothing out those dimples. Those who’ve experimented with it have found the results to be very positive. It’s called tretinoin, also known as Retin-A, and it’s available by prescription only.

Tretinoin has been scientifically shown to thicken the outermost layer of the skin, resulting in keeping the cellulite from bulging out as much as it currently may be. The condition will still be present, but it won’t be as obvious because of the thicker skin keeping it under control.

There is an over-the-counter alternative to Retin-A called retinol, and this product has been added to some of the newer anti-cellulite creams on the market. However, this idea is flawed because retinol is of a much weaker concentration than prescription-strength tretinoin and most likely will not work to thicken the skin.

Women who are tired of attempting to find a cream that works have been doing their best to find alternative treatments. There are many choices, including massage, various body wraps, Endermologie, TriActive, VelaSmooth, and a newly available therapy called Mesotherapy.

Of the above treatments, the most pleasurable one is massage. It is proven to be somewhat effective in reducing the severity of cellulite by reducing fluid buildup by increasing circulation to the affected area. Body wraps work in a similar manner; any subcutaneous water underneath the occlusive wrap will be reduced by means of sweat, thereby smoothing the skin temporarily.

Endermologie is a technique that was developed by the French in the 1980s and is the first cellulite treatment approved by the FDA. It’s a machine comprised of two rollers that work to produce a suction action, which results in the top layer of fat folding as the machine rolls over it.

This folding action stretches the connective tissue, acting as iron of sorts by temporarily distributing the fat cells evenly underneath the skin. Since the suction caused by the rolls also massages the skin, circulation is improved as well, which further helps smooth out the skin.

Endermologie treatments take about 40 minutes, and results aren’t visible until after about a dozen treatments. Sessions cost around $100 each, and in the early stages, are usually scheduled twice weekly. Once some results are seen, keeping up with monthly treatments is still necessary as any results will be temporary, and therapy needs to be kept up to keep cellulite as minimal as possible.

As with any procedure, certain side effects are possible and may involve bruising or soreness in the areas treated. Some may find the rollers painful, but this depends on the person’s individual pain tolerance. Endermologie is not recommended for anyone who isn’t physically active and is also said to be ineffective for those who are overweight.

TriActive is the first FDA-approved anti-cellulite laser system. It was originally developed in Italy and became available in the States in 2005. This treatment works through three different mechanisms: physical, thermal, and mechanical.

The physical element is comprised of a six diode laser that’s said to penetrate through the skin to break up the bulging fat cells while stimulating the skin to produce collagen. The thermal component is the machine’s cryotherapy system, which is basically a cooled metal plate used to prevent redness or swelling, which may otherwise result from post-laser treatment. The final part of the TriActive system is the massage it incorporates into the laser treatment to increase circulation through the area.

TriActive treatments cost about the same as Endermologie therapy, with a similar number of total treatments being necessary (bringing the total cost to an average of $1,500). Monthly maintenance is once again a must since this is not a cure for cellulite but merely a means to keep it as minimal as possible. Once again, TriActive therapy is only recommended to those who are within healthy body fat ranges and maintain a fit lifestyle.

VelaSmooth, with its infrared light

VelaSmooth has been around for about as long as TriActive, after receiving FDA approval the same year. It’s sometimes referred to as LipoLite, and it works by incorporating radiofrequency energy, infrared light, suction, and massage to increase blood flow while smoothing out fat cells through the adipose layer under the skin.

The company describes this action by stating that while the light energy pre-heats the treatment area, gentle suction helps radiofrequency energy penetrate into the fat tissue, thereby redistributing the cells and increasing circulation.

For VelaSmooth to be effective, a minimum of 12 visits is said to be required. Each session is quite costly at around $200, and as with any of the above treatments, results are far from consistent or guaranteed. Some women report dramatic differences in the texture of their skin, while others find it to be nothing but a whole lot of hype.

The most recent cellulite treatment to hit the US is Mesotherapy. It’s been used in France for decades, since 1952, but is just now beginning to gain popularity outside of Europe. This technique is the most invasive of all cellulite treatments available (outside of liposuction), as it involves multiple direct injections into the affected areas.

The substance injected is comprised of a combination of products that’s said to be tailored to meet each person’s needs. As many as a dozen microinjections may be necessary at each session, and treatments are usually administered weekly.

The good news is that visible results are sometimes seen after just four weeks. Some women experience a significant reduction of cellulite and improved skin condition after an average of ten treatments. This makes sense, as effective doses of the drugs can now be delivered exactly where they need to go for maximum benefit, bypassing the outer skin’s layers that would’ve otherwise been impossible to penetrate.

At a minimum of $400.00 per session, Mesotherapy is currently the most expensive cellulite treatment therapy. However: once the round of treatments has been completed, the results are said to be permanent with active, healthy, and otherwise lean individuals. Because of this, this technique seems to show the greatest promise.

Keep in mind that while the FDA has approved the medicines used in Mesotherapy, the procedure itself is not. These drug formulations still need to be standardized, as no set treatment protocol currently exists. When considering this therapy, be sure that the person administering it is a qualified Cosmetic Surgeon or Dermatologist — there’s a lot of risks involved since there are no regulations currently set in place.

Regardless of the alternative techniques you may choose to experiment with, and one thing remains certain: diet and exercise are the only guaranteed, proven ways to fight the dreaded “C” word. Any of the above methods may help to smooth out the skin’s appearance, but without solid weight training, cardiovascular and nutrition plans in place, there’s no hope of a smooth backside that’s actually there to stay.