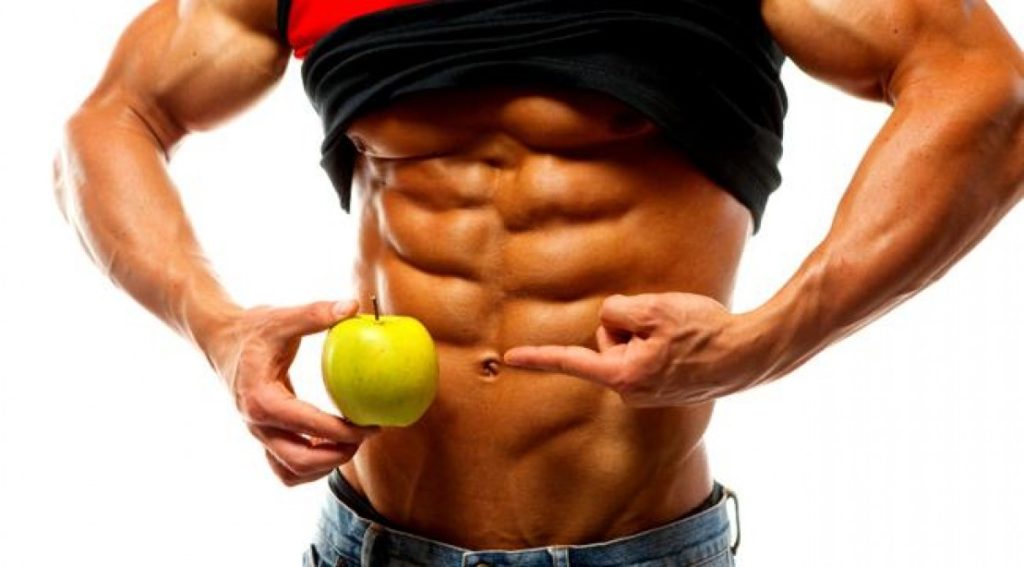 Resting Metabolic Rate (RMR) can justifiably claim 60% to 75% of our Total Energy Expenditure (TEE). Simply put, TEE, is the total amount of energy that we expend throughout an entire day. Digestion and absorption of food are called the Thermogenic Effect of Feeding (TEF) and accounts for 5% to 10% of our TEE. Energy expended via physical activity is called the Thermogenic Effect of Activity (TEA), which comprises roughly 20% to 30% of our TEE. Body Surface Area (BSA) is a major determinant of RMR, however, voluntary behaviors such as diet and exercise influence RMR in a positive manner.

Calorie restrictive diets can decrease RMR. I am sure that you have heard the story, someone diet in an extreme fashion and later regains their weight loss as they return to their normal eating patterns. Your metabolism is what you make it.

Scientific evidence notes that TEE is the most important value when attempting to manipulate energy balance. Let us probe further into the involuntary RMR, which has been and is currently utilized in countless research studies. RMR is measured resting following a 12-hour fast, which assists in controlling the impact that the TEF and TEA usually have on RMR.

What Is The Resting Metabolic Rate (RMR)? 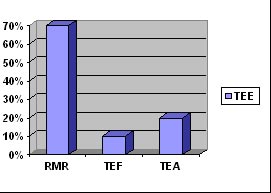 What exactly is RMR? RMR represents all energy necessary to maintain respiration, blood pressure, and heart rate. Specifically, it is thought that RMR is distributed as follows: (7%) kidney function, (10%) heart, (18%) skeletal muscle, (19%) brain function, (27%) liver function, and (19%) other vital processes. (1)

Interesting determinants of RMR include the phase of the female menstrual cycle and the release of thyroid hormones, which are categorized as catecholamines[Define]. The later events can actually increase RMR during times of fertilization. Compellingly, when one restricts energy intake too severely a decrease in triiodothyronine (T3) and norepinephrine will lessen RMR. To a certain extent, RMR is based solely on genetics, however, RMR can be permanently altered. RMR will increase in reaction to extremes in the body’s temperature.

Additionally, it is estimated that the luteal phase or fertile portion of the menstrual cycle can increase RMR by 5%. Ovulation occurs during the luteal phase when the female produces progesterone thus increasing body temperature. The elevated temperature acts as an incubator for the maturing fertilized egg, granted conception has occurred. This increase in temperature involuntarily elevates the female’s resting metabolism. Many factors of RMR are beyond our control, however voluntary behavioral changes such as diet and exercise can influence RMR.

Does Diet And Exercise Affect The Resting Metabolic Rate?

To answer the age old question does dieting decrease the RMR we look at a meta-analysis. Twenty-two studies focusing on diet and RMR were compared, Thompson and coworkers have determined that RMR does indeed decrease to a significant degree when an individual is compliant with a diet regimen that is composed of less than 941 calories a day. For the record, the studies primarily targeted females between 31 and 45 years old.

What about dieting with exercise? Will it make a bad situation worse? The same researchers conclude, if a healthy diet is prescribed by a qualified professional (in the US & Canada this is a Registered Dietitian) and the subject is well monitored, the loss of FFM should be no more than 20% to 30% of the total weight loss. This amount is considered reasonable as researchers believe that the results of healthy weight loss are roughly 25% LBM and 75% adipose tissue (fat).

At first glance, it seems as if exercise may allow an individual to maintain more LBM if they exercise while dieting, What about different types of exercise utilized during a period of caloric restriction, will this make a difference in RMR? In a 3-month study, 69 clinically obese females were assigned to 1 of 4 groups. There was a diet only “control group”, diet and endurance exercise, diet and resistance training, and diet and endurance exercise plus resistance training group. The subjects consumed a very low-calorie liquid-based diet containing 522 calories a day. Amazingly the changes in weight, body fat percentage, and LBM were not statistically different between all groups. However, a decline in RMR was noted and expected.

Due to the extremely low-calorie diet an approximate decrease of 7% to 12% of RMR was observed in all groups. The effects of resistance training were measured utilizing a strength index calculated as the 1 repetition maximum (1 Rep Max). Values for the bench press, latissimus pull-down, leg extension, and leg curl were studied. A 6% decrease in strength was noted in the diet only and in the diet plus endurance exercise group. Astonishingly a 10% strength increase was noted in the resistance-training group and a 3% increase was noted in the endurance plus resistance training group.

In these studies, neither the endurance exercise group nor the resistance training exercise prevented the severe low-calorie diet-induced decline in RMR and the individuals still had a significant increase in strength.

The Impact Of Nutrition And Exercise On Both Sexes

This research thus far has targeted the female population, McCargar probed further to find results that were well rounded. This report focuses on the effects of nutrition and exercise and the impact that they have on body composition in both sexes.

The researchers Ballor and Poehlman examined 46 human studies in an effort to determine how training and gender influence body composition. All studies were at a minimum of 4 weeks in duration. A diet restriction and body composition determined by skinfold calipers or hydrostatic technique was conducted in each study.

It is important to note that not all studies included an exercise program; therefore comparisons were differentiated between the diet groups and diet and exercise groups. Furthermore, differences were noted between the male and female subjects.

The fundamental findings revealed that the loss of LBM was significantly less in the diet and exercise group, additionally; this was consistent for both sexes. Approximately 72% of the weight loss was body fat and 28% of weight loss was from LBM in the males.

In female subjects, 76% of weight loss was from body fat and 24% from LBM. The review of these studies revealed that the conservation of LBM was possible with modest resistance training done 3 times a week at a low to moderate intensity. That review crushed the common belief that it is harder for women than it is for men to lose weight. The females had an average of 4% more fat loss and conservation of 4% more LBM than that of the male subjects.

It takes energy to burn energy and there is scientific evidence that suggests an increased food intake increases RMR. This method has been exhibited in patients suffering from anorexia nervosa. Patients that participated in a professional nutritional replenishment program increased their RMR. If performed scientifically, increasing one’s food intake can evolve a swell in RMR, a rise so colossal that it outweighs the possible increase in body mass.

It is widely known that exercise increases metabolism. To be precise the elevation in metabolism occurs during exercise and immediately following. A study, which revealed a statistically significant increase in RMR, was conducted. The subjects consisted of 18 individuals their ages averaged to 66 years old.

The study involved 10 males and 8 females who were embarking on a cycling regimen for 8 weeks. The subjects were going to cycle for 3 days each week. During the first week, subjects cycled at 60% of their maximum oxygen consumption (VO2 max) until 150 calories were combusted. In their eighth week, subjects cycled at 80% VO2 max till 300 calories were combusted.

Their body weight did not change significantly; therefore it can be said that they did not gain or lose LBM or fat throughout the 8-week study. VO2 max increase was statistically significant. At the start of the program, VO2 rose from 1.9 Liters of oxygen a minute (L/min) to 2.1 L/min.

When measured, cycling enhanced RMR by 11%. Pre-study the calories burned were 1.17 calories per minute versus the post-study results of 1.29 calories a minute. The noted increase in metabolism is not directly related to exercise alone, an energy flux had to have taken place.

Because the subjects did not experience weight change, an additional intake of food had to have been consumed in order to compensate for the extra energy expended in the study. This study reinforced what was found in the anorexic study, nutritional factors can change metabolism, in this instance the effect related to endurance exercise.

Placing The Right Emphasis On Diet And Exercise

Maintaining an energy flux is important and it can be said that increasing LBM via resistance training should increase RMR. Although I advocate and firmly believe in diet and exercise in regards to weight loss, gaining LBM, and increasing RMR, people place unrealistic expectations on their regimens.

A researcher named Zelasko addressed this and stated that the way individuals perceive the role of exercise in weight loss and energy expenditure has become rather exaggerated through time. The major factor in losing fat is time, said Zelasko, and if TEE would be focused on, high-intensity exercises would prevail.

Even though high-intensity training uses a low percentage of body fat, it disburses more fat energy as well as TEE. All this energy and fat utilization do not occur at that given time but rather in the context of the entire day. TEE is critical in determining energy balance.

Most diet and exercise regimens will allow RMR to remain relatively fixed, however, if a person increases their LBM they will burn more calories per kilogram of total bodyweight (Figure 2) thus enhancing their RMR. The TEF and TEA comprise the remaining energy expended factors, furthermore, they are the most variable as well as the most likely to make a change.

Exercise regimens are of utmost importance but emphasize on being consistent foremost, then utilize the acronym F.I.T., which stands for frequency, intensity, and time. Unplanned exercise and daily physical activity are also key factors when increasing RMR is the topic at hand.

Additionally, let us not forget my favorite phenomenon, the TEF; consuming tons of fibrous vegetables daily can increase your metabolism via the calories burned during digestion. Therefore it is the total amount of energy you expend in a day that should be considered if flourishing long-term weight reduction and maintenance is your ultimate goal.

In culmination, it can be said with statistical significance that diets restricting intake less than around 1000 calories a day should be avoided, as they can decrease RMR and furthermore antagonize the many benefits associated with exercise.

The suggested caloric intake falls within the REE and TEE, which represents a caloric restriction of 15%-20% for healthy and gradual weight reduction.

Exercise should be part of all weight reduction programs. Anaerobic activity done minimally 3 times a week at low to moderate intensity gradually increasing over time is suggested and adding resistance training will be advantageous allowing LBM and RMR to remain somewhat preserved.

TEE should be the main consideration in all strategies attempting to alter energy balance in a positive way. The TEF and TEA comprise up to 40% of TEE and they are the most variable and likely to make a change utilize them.

High-intensity exercises have the greatest impact on TEE. If one increases these they have then shifted the normal curve positively in their favor and have made one of the most difficult things in the world become a reality.

Shedding body fat and gaining or maintaining LBM takes planning, dedication, and can be considered an artful science in itself.